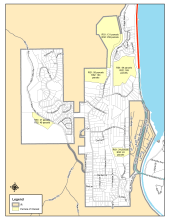 I sent the following to the Board of Education Trustee for rural Penticton, Ginny Manning.  The email is a follow-on to my previous comments on this issue:

I appreciate you are in the final stages of deliberation on the school closure decision but I thought I should add some specifics to the issues I raised in late October. I asked RDOS staff to take a quick look at the "low hanging fruit" on the greater West Bench—large, privately-owned, non-ALR parcels that could be developed if there was a willingness to build sewer connections to the City of Penticton. Staff came up with a range of between 334 and 601 potential new residences depending on zoning. A map showing the parcels in question is attached.

For reference, the existing West Bench Elementary School catchment (the neighborhoods of West Bench, Sage Mesa, Husula Highlands, and Westwood Properties) contains about 615 residences. Thus, infill development on these large parcels may potentially double the size of the West Bench catchment. The zones used in the analysis (RS1 and RS2) are considered "low density residential". The number of potential new families on the West Bench would increase even more if multi-family uses were contemplated. Finally, you will see from the map that this estimate excludes the possibility of new subdivisions on PIB lands (such as the Skaha Hills development)

Of course I cannot comment on the likelihood that these large parcels will be developed in the near future, especially given what seems to be an endless period of economic uncertainty. However, I can say that some large scale developments are being considered. West Bench Elementary is clearly central to this development and renewal potential. Please let me know if you have any questions about any of this.