[This is an attempt at a brief history of the horse problem.  If you know more about it, please let me know and I will update this posting.  Unfortunately, I have been unable to find much information at the RDOS since the RDOS has historically considered this a Provincial / Penticton Indian Band matter.] 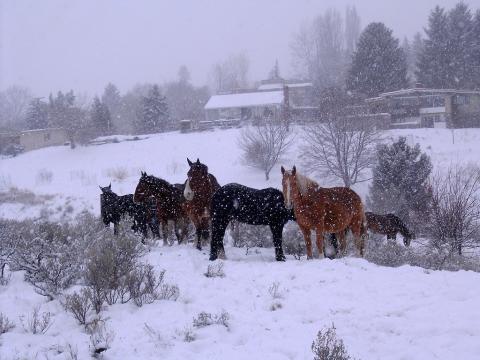 Wandering horses have become a serious problem on the West Bench in the past 20 years. The horses normally roam First Nations land and crown land on the hills above the West Bench.  In the winter, however, the horses move down in to populated areas, where they leave a surprising quantity of droppings, dig up lawns, damage trees, and trample on the occasional in-ground sprinkler head.

Prior to the late 1980s, the Canadian Pacific Railroad (and previously the Kettle Valley Railroad) maintained fencing along the west side of the railbed to keep horses and other livestock off the track.  Following the demise of the railroad, these fences were kept up in the 1980s by a group of volunteers, including Mel Murton and Bob Jenkins. Materials for these repairs were often paid for by the West Bench Irrigation District. Unfortunately, the volunteers eventually lost their battle against natural decay and recreational users (seeking access to trails) and the fences today are essentially non-existent.

As it turns out, the West Bench is not the only part of the world with a wild horse problem.  The western United States has about 33,000 roaming mustangs plus another 30,000 corraled at a cost of US$26M per year.  The plight of these wild horses was the topic of a recent article in the New York Times. Some parts of the US also have a problem with feral pigs—about 4-5 million of them.  This story in The Economist makes think that we are relatively lucky with our horse problem. Finally, closer to home, this story in the Oliver Chronicle (see page 2) provides some background about the horse problem in the South Okanagan.

Current Status of the Problem

The Province of British Columbia has strong "right to farm" legislation and, as a consequence, property owners (rather than livestock owners) are generally responsible for keeping animals off private property. This is explained in a Ministry of Agriculture Farm Practices summary:

The Livestock Act defines Livestock Districts (areas where livestock may be at large) and Pound Districts (areas where livestock at large are subject to capture) and the conditions of capture, liability and trespass. The Range Act defines conditions that livestock may be on Crown land. The Trespass Act requires the owners of adjoining land in a rural area to make, keep up and repair the fence between their properties, unless otherwise agreed upon.

Complaints may arise from neighbours who do not understand that in many situations they must fence out other people’s livestock, whether livestock are straying onto their property from deeded or Crown land.

In other words, if you live in a rural area and someone else's horses are making a mess of your lawn, it is your responsibility to erect fencing to keep the horses out.  This does not strike many residents as fair.  But it is what the law says.

Municipalities and regional districts in British Columbia are free to establish "pound areas" in order to enact and enforce animal control bylaws in neighborhoods adjacent to "livestock areas".  Although some attempts have been made in the past to impound wandering horses in both Area F and Summerland, the impounding approach raises some tricky economic and political issues. The key economic issue is that impounding is expensive—we are talking about huge animals here, not dogs and cats. The key political issue is that impounding horses that belong to members of the Penticton Indian Band and threatening destruction or sale if the owners do not reimburse the impounding costs is perhaps not the best way to build better relationships with our First Nations neighbors.

As of March 2009, there are many horses wandering the neighborhoods on Penticton's west bench.  A group of animal rights supporters have begun supplying hay to feed the horses, which has apparently increased the concentration of the animals in areas where they have not traditionally been found in large numbers.  I have received a steadily-increasing volume of calls from residents—some of them long-time West Benchers—arguing that the winter of 2008-09 has been the worst ever for horses and that the RDOS should do something.

The Role of the RDOS

Regional Districts in British Columbia provide "general government" (e.g., land use planning, bylaw creation and enforcement) for rural, unincorporated areas of the province. Regional districts are also permitted to provide other services desired by residents.  Thus, for example, the RDOS provides garbage and recycling collection for most residents of the regional district. The RDOS also supplies water for some areas such as the village of Naramata and Faulder.

The RDOS is permitted to provide its residents with a new service (let's call it "horse control") as long as some basic conditions are met: 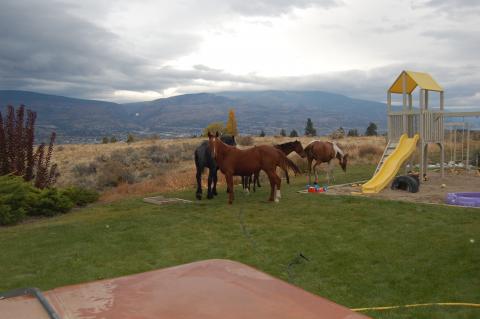 A Proposal for a Horse Control Service

I have recently initiated a project at the board level of the RDOS to develop a horse control service for the west side of Okanagan Lake. See:

I personally have no firm idea of what an effective horse control service might look like or what its scope might be (e.g., does it include rural Summerland and parts of RDOS Area D south of the airport?).  At this early stage, I have semi-randomly assembled collection of stakeholders to act as a Delphi panel.  Most of the members of the Delphi panel are residents of the effected area although I have also included a handful of RDOS staff.  The purpose of the Delphi panel is to ensure that residents are heard very early in the decision process.  Ultimately, a recommended course of action will be developed by RDOS staff in consultation with experts, consultants, and other levels of governments including the Penticton Indian Band.  However, I believe that it is important to give staff clear direction about our goals and objectives before they start investigating solutions.  I also believe that local residents posess valuable knowledge about the horse problem and should be asked to help generate potential solutions.

The decision process I envision for addressing the horse problem is described on the next page of this document.

This issue went largely dormant between 2009 and 2012.  This was likely due to two factors:

Gradually, however, the problem seemed to get worse.  Knowing what we know now about the number of horses in question, it seems reasonable to conclude that there is a tipping point in the number of horses. The helicopter survey in the spring of 2014 showed PIB lands are covered with horses.  For the 20 or 30 we see on the West Bench there are hundreds more staking out their territory in the hills.  Once the horse population reaches a certain point, some of them must migrate to the West Bench to find food.  ​A handful of feeding stations are not sufficient.

So we are once again faced with a serious horse problem, as we were in the winter of 2008.  My most recent update can be found below.

I received the following feedback regarding the temporary feeding stations:

This letter is in respect to your RDOS Fall 2010 Newsletter to the residents of Area “F”.

I resent having to pay anything to support somebody else' animals being allowed  to run at large within the boundaries of the Rural District. I would expect that you should feel the same way also. The feeding stations are just another temporary band-aid solution to this ongoing problem.   I offer the following as a solution to the horse problem in our District.

I lived in Alberta for 30 years and during that time, the Province of Alberta had what is called the “Stray Animals Act and Regulations.”  You can find a copy on the internet under “Government of Alberta Stray Animals Act and Regulations.”  It specifically deals with situations of this nature.  The act and regulations put the onus directly upon the animal owners who are held responsible for their animals and any damage they may cause.  As a suggestion, it may be worth pursuing this with the Province of BC to see if the same type of Act and Regulations can be put in place.  There may be something I'm not aware of here in BC, however, it certainly is worth pursuing.  Please have a look at this Act and Regulations.  It may be that the Rural District could create a bylaw similar to the above act with enforcement regulations.

I'm not a horseman but if the animals are coming to the feeding station in the Rural District, we can contract a rancher to capture these animals and dispose of them in accordance to any regulations that are in place.  Any proceeds from the sale of captured animals could be put towards the ranchers' expenses.

I believe there is a better solution to this problem

My response regarding round-ups

Thanks for your comments.  This is precisely the kind of feedback we are looking for as we move towards a decision in the fall of 2011.

As for the impounding solution, it is something that has come up in the 2010 Residents' Survey as being favored.  I have asked RDOS staff to look into the costs so that we can flesh out a proposal.

Impounding is permitted in BC (see the main article above for additional background) and has been used in the past on the West Bench.  Two problems arise: (a) it is expensive and (b) we have no way to compel anyone to pay the costs.  Indeed, the horses are so nearly worthless that the threat of destruction is empty.  The cost to the RDOS of corralling and disposing of roaming horses is bound to be significant (though, as I say above, we are trying to put together some specific numbers).

Of course, there are serious political implication with the PIB and also a large block of horse supporters within our own community. This is something that will also become a factor in the decision.